About Devaney Claro and his Art:

Devaney Claro  has been experimenting with several forms of visual expressions through the years, ranging from three-dimensional works to photography and paintings.

He has a formal education in fine arts as well as in modern languages, with a major in Portuguese and English. While living in Rio de Janeiro, Brazil, where he was born and grew up, he attended fine art classes at Liceu de Artes e Oficios, Escola de Belas Artes at the Universidade Federal do Rio de Janeiro and Escola de Artes Visuais do Parque Lage in Rio de Janeiro. In Munich, Germany, he finished his post graduation in Fine Arts in 2011 at the Ludwig-Maximilian-Universitaet.  He has been living and working as an artist in Munich as well as in Rio de Janeiro.

His artistical impulse and motivation come from several subjects, such as philosophy, mythology, poetry and visual art itself; but the artistical input can also be a moment, a feeling, a sight, a flow of thoughts, an answer or a question, or even an obsession which will be captured on the surface of the work.

His works are deeply anchored in the roots of international and Brazilian Modern and Post Modern Art. He admires the works of the old European Masters as well as the works of Van Gogh, Matisse, Paul Klee, Piet Mondrian, Mark Rothko, Bridget Riley, Sean Scully, Alfredo Volpi  among others. For him, those artists are the real colourists who freed colours from form to give art a new dimension of meaning. It goes without saying that the works of the Brazilian Neo-Concretist artists, such as Helio Oiticica and Lygia Clark are also important references for him. He also traces back his own artistical production for new pictorial outputs.

Devaney Claro believes that an artist is always in a process of transformation and that he can never be finished with such a process, because every project worked on raises yet more questions for future projects. Art is thus an eternal search, a quest on a path paved with uncertainties, the result of this quest being the artist's production itself. 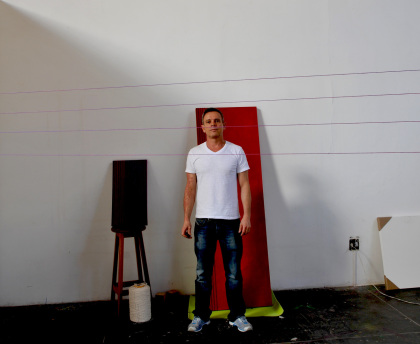 Devaney Claro in the studio at Largo das Artes, Rio de Janeiro in May, 2015. ©VG Bild-Kunst