Some latest works... Everything is Flux... Panta Rhei.

Gathering the fragments of an invisible river that never stops flowing.

The artworks showcased here are a result of Devaney Claro’s latest pictorial research inspired by the concept of the “panta rhei” (Everything is flux) from the ancient Greek Philosopher Eraclitus of Ephesus who stated that “no man ever steps in the same river twice, for it is not the same river and he is not the same man.” The artist interpreted the concept and developed it during his artist residency at Largo das Artes, Rio de Janeiro, Brazil in April and May 2015.

In the first phase, the artist paints expanded raw cotton threads with acrylic colours to catch fragments of time or of the panta rhei while the colours dry out. This is for the artist a magical moment when the raw blank lines are semantically charged by his hands with his colours and gestures as he immerses them in the continuous and invisible river of life flowing around us. And so he allows the lines to develop their latent poetic essence. On a simple cotton thread the colours reveal their essential and emotional potentiality.

In the second phase the artist treats the coloured lines on a surface according to the subject he is working on.

Once a work is complete, it reflects from its core the dualism of time and space. It is a pictorial interpretation of fragments of the eternal flux of life, an image of the present compressed between the past and the future, a picture of the panta rhei. The artist sees every artwork as a visual network, a fabric, in which time, space, ideas, meanings and emotions are interwoven. 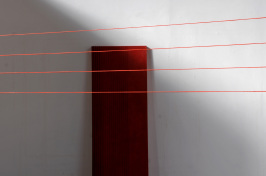 Expanded Lines capturing the fragments of time in Rio de Janeiro, May 2015. Click on the photo to see the video.